Sanjay Dutt Should Work Harder To Progress In The Film Industry! 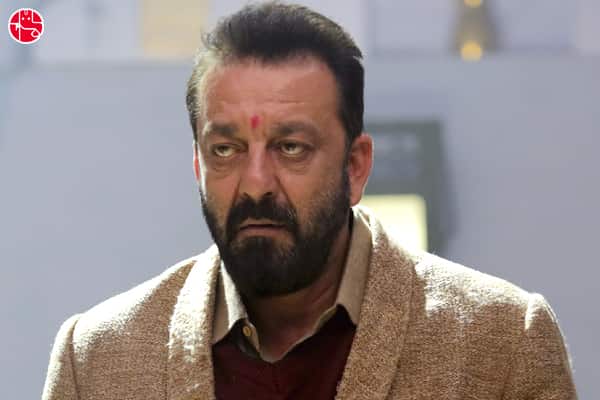 (Image Source: Internet)
Sanjay Dutt Astrology Predictions for 2018-2019
Son of actor Sunil Dutt and Nargis Dutt - Sanjay Dutt is a famous Bollywood actor and producer. During his film career, Sanjay Balraj Dutt has received various types of awards which include 2 Filmfare, 2 IIFA, Bollywood Movie, Screen, Stardust and Global Indian Film awards. Moreover, he has won the hearts of several people by his unique personality and Gandhigiri. Sanju baba made his acting debut in 1971 as a child artist in Reshma aur Shera. Thereafter in 1981, he started working as an actor in the film Rocky. He is highly popular amongst both his fans and critics due to his impressive performance in more than 100 films which include romantic, comedy and action movies. Sanjay Dutt's career has been a huge hit. How will your career fare in the near future? Find it out with 2017 Career Report.
Conferred with numerous awards, this talented actor has especially won accolades through his role as a gangster and police officer. During his 35-year film career, he has acted in many superhit films like Munnabhai MBBS, Vaastav, Agnipath-2, Zinda, Kante, Mission Kashmir and Musafir.  This majestic personality recently celebrated his birthday, hence Ganesha analysed the horoscope of Sanjay Dutt to foretell his future.
Sanjay Dutt
Date of Birth: 29 July 1959
Birth Time: Unavailable
Place of Birth: Mumbai, Maharashtra, India
Surya Kundli 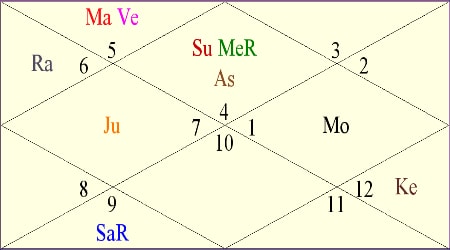 What Do The Planets Indicate:

Career As An Actor & Producer:

Based on analysis of solar horoscope, Sanjay Dutt is associated with the acting field due to Venus-Mars Navpancham Yog. Moreover, Mars is lord of father's house and Venus is lord of mother's house. The lord of 9th house – Jupiter and Lord of 1st house – Moon are in opposition in the Kendra, and thus forms Gaj Kesri Yog, which can be termed as 'born with a golden spoon'. As a result, Sanjay Dutt has become a successful producer.

Challenging Time Due To Rahu:

Sanjay Dutt succeeds after working hard as Saturn is posited in 6th house. He was also associated with politics field under the influence of Jupiter - lord of 6th house,  Saturn - lord of 8th house, and Mercury - lord of 12th house. Moreover, he was jailed under TADA due to 7th house lord - Saturn's aspect on Rahu. But, Sanjay Dutt was released as lord of 9th house – Jupiter aspects the Moon.

What Do The Planetary Transits Mean For Him:

What About His Forthcoming Year?

Tough Phase For His Career:

Considering transit of 9th house lord - Jupiter, the period from 29 July 2017 to 12 September 2017 will be average for Sanjay Dutt's profession. But, Sanjay Dutt will be highly successful in his career during Jupiter's transit in Libra sign from 12 September 2017 to 12 October 2018, says Ganesha. Moreover, he will also gain fame as Jupiter is passing through 7th house from the Moon. Besides, from 29 July 2017 to 26 October 2017 Saturn will transit in Scorpio sign and 8th house. Consequently, Sanjay Dutt will have to work very hard but gain very less.

Hurdles On Financial And Professional Front:

Sanjay Dutt will gain immense popularity in his profession after 26 October 2017 due to Saturn's transit in Sagittarius sign. Moreover, Sanjay Dutt will succeed on the professional front as Rahu will be posited in Leo sign till 18th August 2017. But, he may face some obstacles on the financial front as Ketu is posited in Aquarius sign. Besides, after 18th August 2017 Rahu's transit over natal Mercury and Sun, through Cancer sign and 4th house from natal Moon may cause some difficulties in Sanjay Dutt's personal life. Whereas, Ketu's transit in Capricorn sign and 10th house, indicates some hurdles on the professional front. Sanjay Dutt may face some hurdles on financial front. But do you want your financial situation to zoom? Get the Free 2017 Finance Report, know the future, boost your financial situation.

From 13 October 2017 to 29 November 2017, Mars will transit in Virgo sign and over natal Rahu, and thus cause some health issues. Hence, Sanjay Dutt should especially take care of his health, cautions Ganesha. Moreover, he will remain very busy due to his films or some other activities during this period.

Mars will transit in Libra sign from 29 November 2017 to 26 January 2018, and then transit in Scorpio sign from 26 January 2018 to 7 March 2018, which indicates financial growth for Sanjay Dutt. Further, Mars transit in Sagittarius sign from 7 March 2018 to 1 May 2018 will cause new developments. Overall, the new year will be progressive for Sanjay Dutt.
Best wishes to Sanjay Dutt on the occasion of his birthday!
With Ganesha's Grace,
Prakash Pandya
The GaneshaSpeaks.com Team
For Instant Solutions! Talk To Astrologer Now.
Share