Opening to Packed Houses, Ghayal Once Again will be able to strike well, bode the stars! 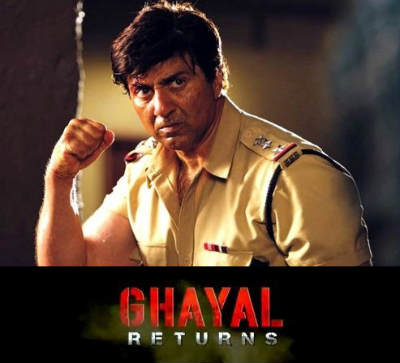 The sequel to the 1990 action drama Ghayal, 'Ghayal-Once Again' has been running into some roadblocks. Directed by Sunny Deol and produced by his father Dharmendra, it was scheduled to release in November 2015, but got delayed due to technical problems and was rescheduled to release in January, which again did not materialize, and now finally it is to release on February 5. Sunny Deol had  hired Hollywood action co-ordinator Dan Bradley for designing action sequences. The film is about how four teenagers out on a photography expedition, accidentally record a murder on camera. The footage turns out to be explosive as it clearly shows two of the city's most powerful peoples involved in the murder. What happens after this is a series of twist and turns where the four kids get entangled and have to fight it out with the most powerful man of the city, and Sunny Deol in the lead role tries to save them. Ganesha here takes a peek at how the film will fare...
Release time chart, Main Territory, Mumbai

Astrological Observations:
Astrological Predictions:
The Movie Electrifying the Masses?
Business Prospects:
Earnings...
Performances and Dialogues:
The areas to look out for:
Good luck and may Lord Ganesha bless the cast and crew of 'Ghayal Once Again'.
With Ganesha's Grace,
The GaneshaSpeaks.com Team
Share