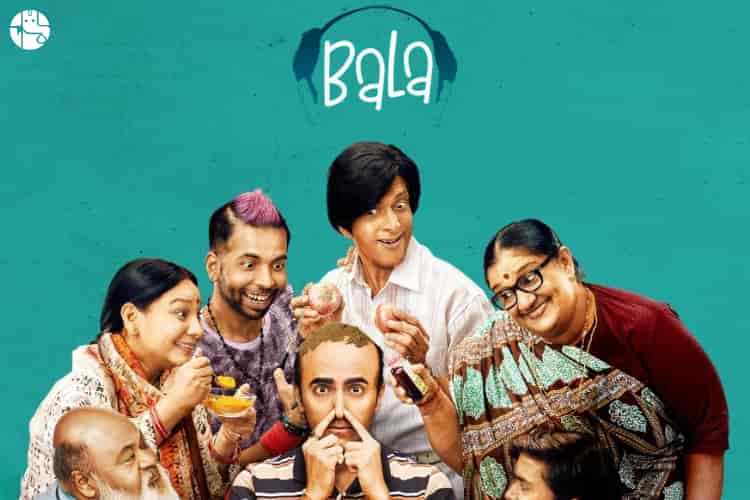 As the season of Ayushmann Khurrana movies is taking a leap, we have yet another movie from this versatile actor. The multi-talented singer-actor is ready with another comedy movie, Bala. This Amar Kaushik directorial and Dinesh Vijan production movie stars Ayushmann Khurrana as Bala, a man who is suffering from Alopecia (baldness). The story of the movie revolves around him being a character who lacks confidence and how he feels the pressure of society because of his premature baldness.

The movie is a package of other talented actors in supporting roles such as Bhumi Pednekar, Yami Gautam, Javed Jaffrey, and Saurabh Shukla. Bala has been shot in Kanpur and Mumbai majorly. This is the third movie of Ayushmann Khurrana with actress Bhumi Pednekar after Dum Laga Ke Haisha and Shubh Mangal Saavdhaan, whereas the second one with Yami Gautam after Vicky Donor. It is believed that the stars in this movie would bring out the best of themselves and make a good combination.

This movie filled with loads of fun and laughter is set to hit the theaters on November 07, 2019. Let’s see what Ganesha predicts for Bala movie’s box office success.

Bala movie is going to be released during Sagittarius Ascendant and its lord Jupiter is conjunct with two planets in the first house. This combination shows that the film is ready to deliver satisfactory opening with strong content. The audience will be glued to the theatres and drawn to watch the movie. However, all generations may not like the film but metro cities will give better business in the initial weeks. Other segments like directions, cinematography, etc. will also give satisfactory results.

As suggested, Venus and Mercury are well placed in this event chart. Hence, be ready to laugh at the enthusiastic performance of Ayushyaman Khurana. Other lead casts will also try to deliver their best performances to entice their audience. As far as the entertainment industry is concerned, this combination denotes opportune signs to receive better compliments and praises from film critics and other film evaluation companies. The music tracks and songs in the movie would receive mixed reviews as a relatable amount of generations would admire them.

Considering all the aforementioned factors, Ganesha feels that Bala is going to open on a positive note at the box office. Hence, the weekend box office prediction is in favor of the movie. Major city’s cinema shall remain house-full during the initial weeks. The good run at the box-office is going to continue all throughout the initial weeks. Chances of doing good business overseas is also expected from the movie.

Ganesha wishes good luck and a bright future to the entire team of Bala movie.

To Get Personalized Solution, Talk To An Astrologer Now!
With Ganesha's Grace,
The GaneshaSpeaks Team