Will Urmila Matondkar Win The Lok Sabha Election In 2019? 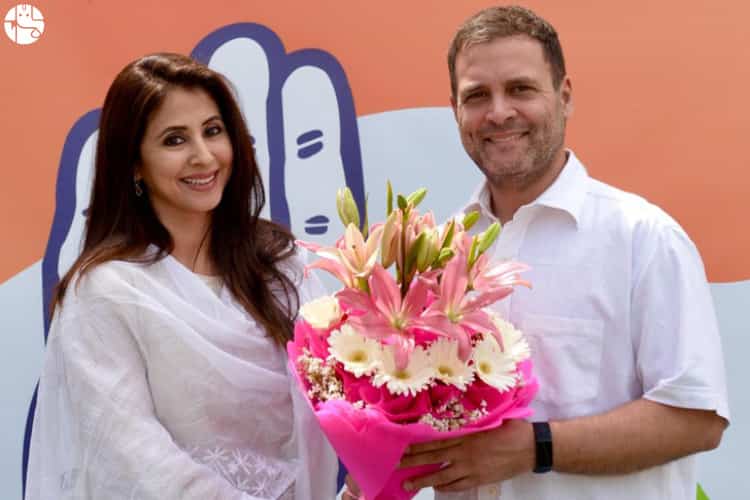 It is said that Bollywood movies sell dreams. They take us into an existence which is neither pure fantasy nor pure reality. The world of movies is an interesting foray into a setting which is powered by imagination and which exerts massive influence on the audience, who form a crucial section of society. While the film world projects glamour and glory, the purpose of the institution of politics is to make concrete changes in the materialistic development of the people, which in turn is very important to make people actualise their dreams as individuals and also collectively as members of society.

Thus, the film world and society share an interesting interdependence. Perhaps, that is the reason why several film stars have joined politics and made a mark there. Eventually, both films and politics are about influencing and drawing the people. Well, the latest development in this field is that Urmila Matondkar, a very successful Hindi film heroine has joined politics. Matondkar joined the Indian National Congress party on 27 March 2019. She will contest from Mumbai North constituency for the upcoming 2019 Lok Sabha election.

Well, Urmila Matondkar is a very popular personality in the Hindi cinema, who has also worked in Malayalam, Marathi, Tamil and Telugu language films. She is the recipient of numerous accolades, including a Filmfare Award, a Screen Award and a Nandi Award. Her film roles contributed to a new on-screen persona for a Hindi film heroine, in which she was known for her acting, intense style and dancing skills. Having done so, Matondkar established herself as a leading actress of Bollywood.

In addition to acting in films, Matondkar is involved with several humanitarian causes and is vocal about issues faced by women and children. She has featured as a talent judge for Sony TV's Jhalak Dikhhla Jaa Season 2, Colors' Chak Dhoom Dhoom and Zee Marathi's Dance Maharashtra Dance.

Urmila Matondkar has mesmerised the audience with her superb acting skills. Well, how will she perform in her political debut? Can she win the election? Can she influence the voters towards her political party, the Congress? Many people may say that all this is speculative. Here Ganesha has analysed her future. So, read on to know the predictions:

Will Face A Tough Contest

Due to the adverse transit of Saturn, it will not be easy for Urmila Matondkar to make inroads into BJP’s voters base. She may face stiff competition from the candidates of other political parties. Urmila Matondkar may face a tough contest in the forthcoming election. She will find it very difficult to take on the rival candidate.

Urmila Matondkar will find it very difficult to create the desired impact on the voters. At the same time, the vote share of her party will grow owing to the planetary support on the voting date. She is likely to retain the traditional voters of Congres. However, it's going to be a tough contest.

Traditional Congress voters will adhere to Urmila, so she will get their votes. However, she will face a neck to neck battle with other parties. Urmila Matondkar is unlikely to win this election.