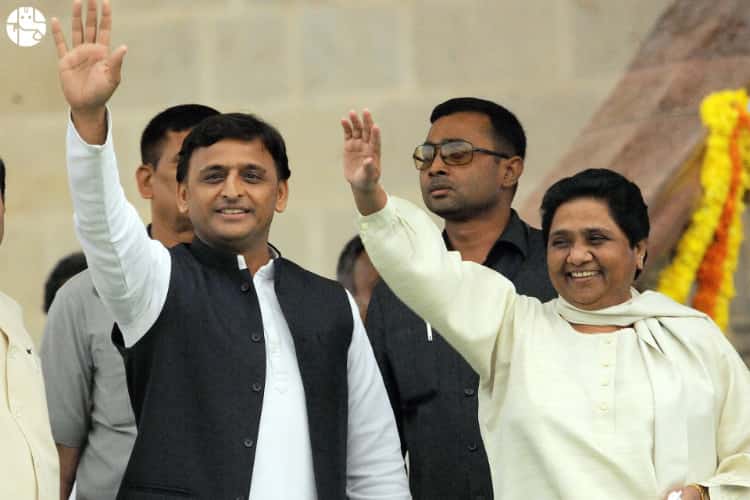 Ideology holds a lot of importance in the democratic and materialistic transformation of society from ignorance, poverty & backwardness to enlightenment, prosperity and equality. It is ideology which determines the flow and force of all-round development. It is said that an inclusive ideology can take people to exalted heights of socio-economic advancement, on the other hand, an exclusive ideology can create a societal divide and cause lopsided development, which is detrimental to the establishment of a fair and free society.

But in several situations, ideology takes a backseat, when the compulsions of politics become more important than core beliefs of the political party. Well, the present situation in Uttar Pradesh (UP) seems to reflect this condition. The two formidable political parties of Uttar Pradesh, Samajwadi Party (SP) and Bahujan Samaj Party (BSP) have come together to fight the (presently) strong Bharatiya Janata Party (BJP). SP and BSP have not just been ideologically distinct but they also are arch-rivals and have represented two opposite poles in the interesting politics of the Hindi heartland.

In a joint press conference in Lucknow on 12th January 2019, SP leader Akhilesh Yadav and BSP leader Mayawati announced the setting up of a grand alliance in order to stop the victory march of the common foe the Bharatiya Janata Party (BJP). Political experts opine that such alliances are for convenience and they tend to be quite short-lived. So, whether this alliance will be successful and till when will it survive is a million dollar question.

Time will show whether SP and BSP alliance can do magic in the upcoming Lok Sabha election. However, here are the predictions, what Ganesha has analysed about the future of this alliance. Read on:

As we know, the SP-BSP alliance is formed to lessen the influence of BJP in the upcoming 2019 Lok Sabha election. Both parties believe that this alliance will help them. However, ascendant in the 12th House and its conjunction with Moon shows that the understanding between the two parties will not be good. There won’t be good and honest communication between them. The lack of coordination between the two parties will hamper the gains which the alliance should have made. The alliance will weaken over the passage of time. Want to know your future? Buy the 2020 Highlights Report.

Alliance May Not Get Expected Benefits

As the Lord of the 1st and 7th Houses Mars and Venus are in trine, so both the partners will try to work for unity. However, as both planets will be placed in the 8th and 12th Houses, so the bonding may not serve well. Thus, they may fail to achieve the expected benefits. There may be problems in the day-to-day functioning of the alliance.

Alliance May Fail To Dominate UP

As there is no good planet in the centre and Ketu is in the centre so this alliance may not do well (as per its expectations). Even though the party’s leaders will try to enforce unity, mutual trust and respect, all this will be seen as artificial and drama. This alliance may reduce BJP’s votes to some extent, but it will fail to dominate UP.