Home Blog Politics Weather Predictions For India Based On Astrometeorology 979

Weather Predictions for India based on Astro-Meteorology

Since Ages, various Astrologers like Polemy, Al Biruni, Maharshi Garg etc. have given many Astrological clues on the subject Astro-Meteorology. Lot of research has been done on this subject in last 100 years. Jim Lewis an American Astrologer has gifted this world with the subject named Astrocartography or Astrogeography. Based on various old and new fundamentals, Ganesha would like to present an academic study on how the Weather would be during next six months, in India.

Solar Ingress chart
Solar Ingress horoscope or Surya Sankraman Kundli is the key to changes in weather at any location.

Following is Solar Ingress chart for India. As IST is decided from Allahabad, Ganesha has taken that location into main consideration to cast the horoscope. Various charts can surely be casted for each region using Coordinates of that state's Capital. As we are to understand how the weather would be in India, this chart would be fine.

Ascendant of this horoscope is ruled by Venus which is posited in Pisces, a watery sign and it is in Scorpio Navmansha. Moreover, Neptune a planet with strong watery influence is placed in the 4th house at critical degree 29. Moon is in Watery sign in the 10th house. Mars is at 22 degree in Gemini so chances of hot winds in Western parts of the country are there. As watery sign also has a strong hold over the chart, there are chances of some raindrops even in Summer. In this Summer, weather will be quite unstable, feels Ganehsa.

Surya Sankraman Kundli for Sun's Ingress in Cancer has some interesting clues. Venus a watery planet is in Watery sign and 4th house obviously is ruled by watery sign Scorpio but it's Lord Mars is in Leo a fire sign. In some parts of India, crops may burn due to heavy rains in this monsoon so farmers will have to be extra careful this time. Mercury in Gemini indicates that heavy rains would not maintain location but will shift from one location to another. This time some regions on the seaside of the eastern coast will have to be extra careful and take precautions for flood, Tsunami or some catastrophe due to water. This Monsoon is going to be heavier for India.

Following is Astrocartography chart for Sun's Ingress in Cancer, as per Western Astrology 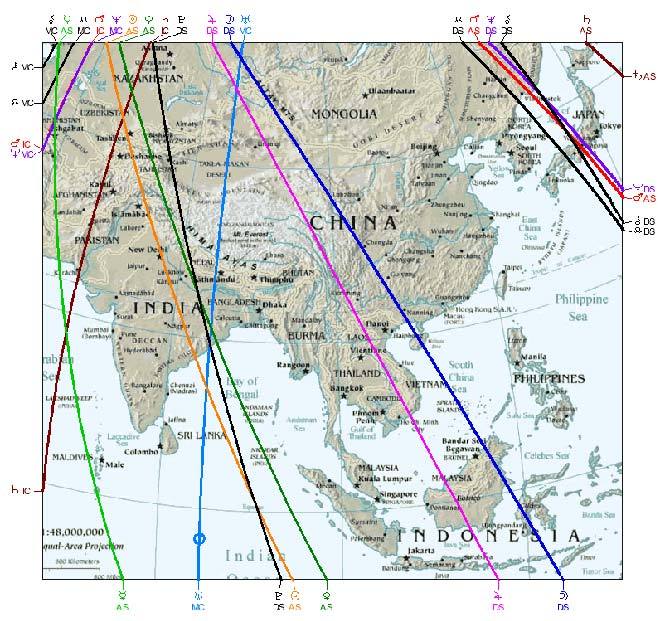 Ganesha observes heavy changes and activities from weather point of view for three months from 21st June 2008 based on this chart. Specifically area near Calcutta, Himachal Pradesh and area around the Bay of Bengal are under heavier planetary influences.

In short, India is going to experience heavy Monsoon this year so keep your raincoats and umbrellas ready!

Ganesha wishes Good luck to all Indians for better disposition during changes in weather.

Good luck and may Lord Ganesha bless you.