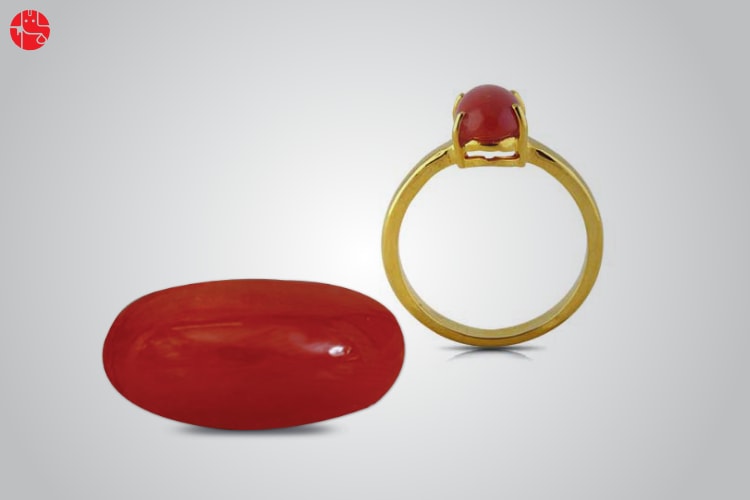 According to Vedic astrology, Red Coral stone is ruled by the planet Mars, who is the God of warfare and the commander of armies of God and it also has explosive and turbulent power.

Red Coral stone, commonly known as Praval or Moong stone was considered very auspicious by Romans and they used to wear Red Coral in amulets.

Red Coral is organic stone and not mined stone or mineral and considered as hot gem by nature. Red Coral is the priceless gift to humans which is gifted by a sea. Red Coral comprises Mangalya Balam which means marriage compatibility.

The stone gives the strength to the marriage life of the wearer and long life of a spouse. There is a belief that the colour of the gemstone transmits from red to yellow changes if the wearer is going to suffer diseases related to blood, bone marrow, lymph nodes and head.

The major deposition of Red Coral stone is in Australia, China, Japan, Italy, Tunisia and Sardinia.

1. What are the astrological benefits of wearing a Red Coral?

Red Coral is the gemstone of the planet Mars, and it increases courage and confidence. It is good for physical health, and it also helps in removing obstacles. It removes lethargical attitude from an individual and gives positive energy to the wearer so that his/ her targets can be achieved.

2. What are the personal benefits of wearing Red Coral?

a) Red Coral is an opaque gemstone very effective for all individuals for radiating their powerful emotions through absorption of red radiating from the spectrum of light and protect the woman from widowhood.

b) Red Coral signifies your energy, courage, self-confidence, desires and protects you from accidents, cuts, operations and surgery.

c) Red Coral increases the energy of Mars in an individual horoscope and an individual is likely to have independent thoughts and can also owe some immovable property.

d) An individual would be sharp wit, probably get success in competitive exams, prosperous life and also get empowers with physical strength.

e) Red Coral is likely to reduce rashness and anger in an individual, harmony in the relationship and ensures material happiness to the individual.

g) The wearer can get rid of the bad dream and also avail financial and professional growth.

h) According to Numerology, Red Coral is a lucky gem for the individuals born with birth number 9 that is the individual born on the date of 9, 18 and 27 of any month.

3. Which individuals should wear Red Coral?

a) Red Coral benefits to the engineers, politician, industrialist, pharmacist and artists working in the circus.

4. Which diseases can be healed wearing a Red Coral?

a) The individuals who are suffering from diseases like fever, smallpox, headache, loss of vitality measles, piles, boils are recommended to wear Red Coral.

b) Red Coral in combination with other gems is recommended to the individuals fighting with cancer, jaundice, asthma, breathing problems, problem-related to kidneys, diabetes, hernia, diseases related to the nervous system, paralysis, menstrual disorder, delivery, surgery, rickets, appendicitis, gouts and many more.

c) The woman can reduce the chances of miscarriage by wearing Red Coral after the completion of 3 months of pregnancy.

d) The development of the children can be improved by Red Coral and also bring harmony in the marital life of a wearer.

e) Red Coral is advisable to the individuals suffering from mental health and depression.

5. Which ascendants should wear Red Coral?

a) For Aries ascendant, if Mars is posited in the first, third, fifth, sixth, ninth, tenth or eleventh house can wear Red Coral and get positive results from it.
Mars is a significant and most potent Yogakarak planet for the individuals of Cancer ascendant. If Mars is posited in the second, third, fifth, seventh or tenth house, then you can increase your fate and fortune by wearing this birthstone for a lifetime.

b) Mars is the auspicious and special planet for the individuals of Leo ascendant. If Mars is posited in the first, third, fourth, sixth, ninth, tenth or eleventh house, then you can increase your fate and fortune by wearing this birthstone for a lifetime.

c) Mars is a significant planet for the individuals of Scorpio ascendant and Mars is the lord of the ascendant. If Mars is posited in the first, fifth, ninth or tenth house, can wear Red Coral and get positive results from it.

d) Mars is a significant planet for the individuals of Sagittarius ascendant. If Mars is posited in the first, third, fifth, sixth, ninth, tenth or eleventh house can wear Red Coral and get positive results from it.

e) Mars is a significant, potent and key planet for the individuals of Pisces ascendant. If Mars is posited in the first, second, third, sixth, ninth, tenth or eleventh house then you can increase your fate and fortune by wearing this birthstone for a lifetime.

b) Mars becomes a problem-creating planet for the individuals of Gemini ascendant and so should avoid wearing the stone.

c) Mars becomes a problem-creating planet for the individuals of Virgo ascendant and so should avoid wearing the stone.

7. Red Coral would give relief from malefic effect of which planet and which Maha Dasha?

Red Coral is helpful to the individuals and removes the weakness and malefic effects of Mars in the horoscope. The placement of Mars is weak, debilitated, combust and is in the fourth, seventh, eighth or twelfth house forming Mangal Dosha in a Kundali then Red Coral is recommended to get positive results.

Do you have Mangal Dosha in your horoscope? Do you know which Mahadasha is going on in your life? Are you facing challenges in your personal relationships? Know about it from your Janampatri and remedies to reduce or negate the malefic effects of weak planets.

If an individual is going through Mars Mahadasha or Mars Antardasha in other Mahadasha and Mars is creating bad influence or weak placement in a horoscope then wearing Red Coral is likely to minimize the bad influence.

8. When, Where and How to wear Red Coral?

a) The weight of the Red Coral should be between six carats and twelve carats and has to be worn on Tuesdays in the first hour from the sunrise time.

b) The wearing of the stone on a Tuesday in Mgrigshira, Chitra, Anuradha and Dhanistha Nakshatra is considered to be auspicious.

c) The Red Coral ring should be of copper or gold and has to be worn on the ring finger of any hands.

d) One can wear the Red Coral ring after dipping it in Gangajal or unboiled milk and energizing the stone by chanting mantra Om Aum Angarkay Namah.

e) You should not wear Red Coral with Diamond, Blue Sapphire and Emerald unless it is recommended by Our Expert Astrologers.

Ask any Questions regarding the carats of the stone to be wear and up to what period you should wear. Know your personalized benefits of wearing a stone in your professional and personal life.

9. On which finger Red Coral should be worn?

The ring should be worn on the ring finger of any hand.

10. In how many days does Red Coral show effects?

Red Coral shows positive or negative results to the wearer within nine days and stays for three years, and after that again, it becomes inactive.
You should change the stone after inactivation.

11. What are the side effects of Red Coral?

a) If an individual is wearing synthetic stone instead of natural coral, then one has to face adverse effects and get negative results to the wearer.

b) If Red Coral is not suitable, then you are likely to be aggressive, get irritated on small things, might have injury or accident and also leads to violence.

c) The intensity of this stone is very high, and even a stone with less than four carats also gives adverse results if it is not natural or does not suit you.

A wrong gemstone can bring adverse effect on your life. So get free consultation before wearing Red Coral.

Thank you. Your Inquiry has been Noted.