Navjot Singh Sidhu may be out of action till the last week of December, feels Ganesha... 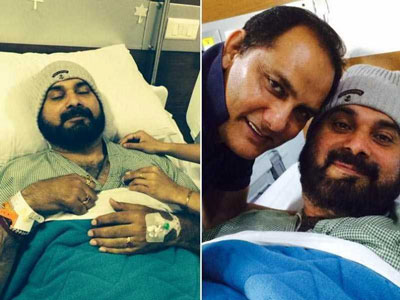 Navjot Singh Sidhu, as flamboyant on TV as a commentator as he was during his playing days as a batsman on the cricket pitch, has been admitted to hospital diagnosed with acute deep vein thrombosis (DVT). This is a life threatening condition if not treated in time. The former India opening batsman is in a stable condition after initial treatment, and in his inimitable way has tweeted that he was "down but not out". Ganesha takes a look at his Solar Chart to find out that Sidhu may recover only after 24th December, 2015.
Navjot Singh Sidhu
Date of Birth: 20th October, 1963
Time of Birth: Not Known
Place of Birth: Patiala, Punjab, India
SOLAR CHART
[Owing to the unavailability of credible birth-time of celebrity, the analysis and predictions have been done on the basis of the Solar Chart/ Surya Kundli with the help of his birth-date and birth-place only.]
1) What may have caused such a sudden health problem for the flamboyant and vibrant personality?
Important astrological observations :-
Astrological Predictions:
2) Will he be able to recover soon, or is some suffering indicated?
Important astrological observations:
Astrological Predictions:
3) Will he appear on more shows on TV, or will he be able to contribute to cricket in the coming months?
Important astrological observations:
Astrological Predictions:
Ganesha wishes Navjot Singh Sidhu a speedy recovery.
With Ganesha's Grace,
Rantidev A. Upadhyay
The GaneshaSpeaks.com Team
Share