Have you encountered the magical number 7 in your life? 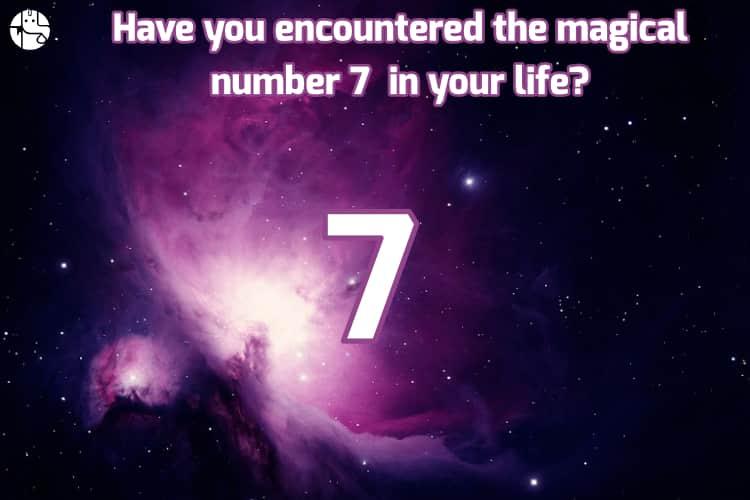 How many of you have heard that God made the world in six days and rested on the seventh day? Fascinating isn’t it? We can’t say this is true for sure. But we can surely see that the seven stars (Saptarishi), seven seas, seven days in a week, and a 7 mukhi rudraksh do exist. The moment someone asks us what our favorite or lucky number is, the number seven would instantly flash into many of our minds! The number seven has some sort of magic bound to it even in numerology. So what is it about the number seven that it makes people go obsessed with it? Let’s find out here.

What is the significance of number 7 in astrology?

The number has its own charm and there is a kind of purity attached to it. While other numbers have their own qualities, seven is the most auspicious number. It is considered as the number of the supreme power and spirituality.

In numerology, people with life path number 7 or associated with the number in any other way are spiritual, intuitive and psychic. They have a kind of lingering influence on others and positive vibes around them. They tend to be more empathetic and sensitive towards others. They are the higher minds that can see beyond what normal human senses can look, touch and feel. Many of them walk the path of spiritualism and have a deep inclination towards unlocking the mysteries of the non-physical dimensions.

Role of the magical number seven in the world

Even in religions, this number holds a deep significance. In Hindu culture, the Brahmanda is said to be divided into 14 worlds as per some Puranas. Out of these 14, seven are the upper worlds and seven are the lower worlds. There are even seven vows and pheras (seven rounds around sacred fire) in Indian marriages.

The ancient mythological or religious cosmology mentions the presence of the seven heavens i.e. the seven levels of heaven. In the Bible, the number seven is signified as completeness or flawlessness as found by the scholars. There is reference to seven heavens even in Judaism and Islam’s holy book, Quran.

What powers and blessings can number 7 give?

The number seven can bless a person with constant longing towards learning and gaining knowledge about many occult things. They are gifted with talents and have a personality that craves for answers. They are driven with a passion to search for reasoning and have an investigative nature. These people can be attracted to scientific studies, innovation, and can become a legal advisor and a scholar.

The number seven in numerology portrays a truth seeker and blesses them with devotion towards the ultimate supreme power. The spiritual side of this number is highly dominative over other traits. It also affects the people who use number seven in their life.

Have you ever seen a repetition of any number in your life matters? These repetitions you see in life should not be taken for granted as they are indicative of many things. The re-occurrences of especially the number seven hold a deep significance in terms of spirituality mixed with numerology.

If you see the number seven being repeated in your journey of life, it means that you have been on the correct path. You should keep moving forward in that path and it will pave the way towards your goal and success in life.

People who warmly keep a hold on the number seven in their life are said to be enveloped in positivity and fortunate moments. More so, being encountered with number 777 or using it in life can gift the person with the divine blessings. This would help the person at every stage and provide a protective cover against any bad luck.

If you come across number seven in business-related matters such as completing a project till the seventh of any month or receive monetary outputs in a remuneration of seven, this indicates that you would manage to be successful in whatever task you have at hand.

The connections of number seven never ends in the world. The seven colors in a rainbow, the seven musical notes, and the seven stars- all have the magic of number seven! So hold on to your life path number seven if present. If you are facing any ill effects in life, get remedial solutions from our expert astrologers.

To Get Your Personalized Solutions, Talk To An Astrologer Now!
With Ganesha’s Grace
The GaneshaSpeaks.com Team