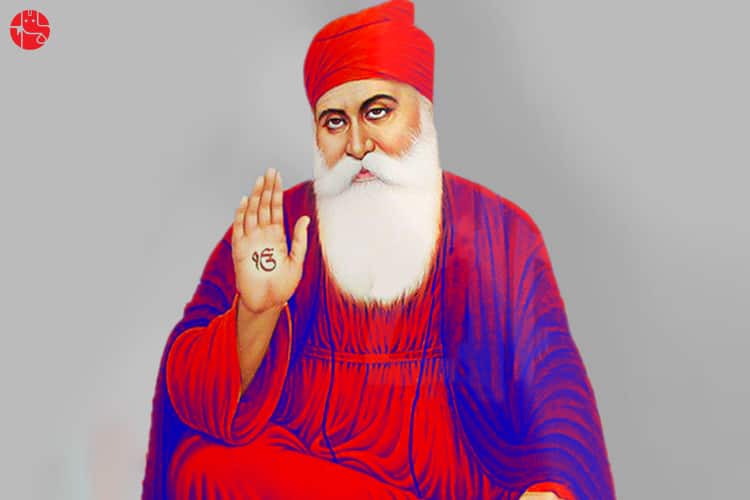 Guru Nanak Dev was born on 15th April 1469, to an accountant Kalyan Chand Das Bedi and Mata Tripta, in Talwandi village. He was born in a Hindu family but was surrounded by Muslims. The elder sister of Guru Nanak was married to Jai Ram in 1475. Guru Nanak stayed with his sister and brother-in-law. At the age of 16, he started working under Daulat Khan Lodi. On 24th September 1487, he married Mata Sulakkani. They had two sons, Sri Chand and Lakhmi Chand.

Taking a step towards his endeavour for social justice and the well-being of all, he became the founder of Sikhism. Faith, honesty, spirituality, and humanity are the few to mention principles of Sikhism. For this great endeavour, the Sikh community revered Guru Nanak as the supreme power of their community. On 22nd September 1539, Guru Nanak’s life came to an end in Kartarpur, Pakistan.

Guru Nanak is respected and worshipped as a religious guru. He is also known as a spiritual healer. He started the composition of Guru Granth Sahib by contributing 974 hymns. Guru Granth Sahib is the holy book of the Sikhs. There are hymns in the scriptures, and everything is written in a poetic and musical style. Guru Nanak dev believed in selfless service to humanity, social justice, and prosperity for all.

Not only the Sikhs but people all over the world have faith in the miraculous powers of Guru Nanak. The celebration of his birth anniversary promotes communal harmony also. The festival is celebrated every year with great fervour and reverence to Guru Nanak Dev. During his lifetime, he opposed many religious and superstitious evils. He gave many life lessons to the people, which carried the essence that God is one and his worship is for the followers of every religion.

Guruparb is made up of two words: “Guru,” which means “teacher,” and “Parb,” which means “day”. On Guruparb, Sikh and Sindhi communities all over the world honour Guru Nanak Dev as their teacher. Since Guru Nanak Dev enlightened humans with his knowledge, this day is also known as Prakash Utsav. Guru Nanak Dev Ji Birthday is a Hindu festival celebrated on the full moon day of the Kartik month. Every year in the months of October or November, according to the Gregorian calendar, people celebrate Guruparb. Traditionally, it is a three-day festival. The preparations for Prakash Utsav begin two days before the festival.

19th November 2021 is the Guru Nanak Jayanti date this year.

As per Hindu Lunar Calendar, Guru Nanak birthday is celebrated on Kartik Purnima. He is the founder of Sikhism. Guru Nanak Gurpurab is the way of celebration that makes his disciples and devotees remember the teachings that he uses to emphasise. It gives a message that one should live life in a right and ethical way.

On the day of Guru Nanak Jayanti, Guru Granth Sahib – the sacred book of the Sikhs, is read with full devotion. It is said that, on this day, priests read Guru Granth Sahib for about 48 hours, non-stop, before the festival commences.

The Teachings Of Guru Nanak Dev

In Vedic Astrology, Saturn is also considered as the teacher; it is the planet of discipline. You get rewards for your hard work based on your karmas and planetary position in your birth chart.

So, why not Get Free Janampatri to know its impact on your life.

The most important ritual is reading Guru Granth Sahib at Gurudwaras in front of all the devotees. Nagar Kirtan – the procession of the Sikh devotees, is conducted a day before Guru Nanak Jayanti.

The procession includes a palanquin. In this ritual, the holy book is carried, and the devotees follow the palanquin by reciting and chanting the religious prayers and hymns. The celebrations of Guru Nanak Jayanti start at around 3 am early in the morning and will end by about 6 am. This time is called Amrit Vela.

As per Guru Nanak, early morning is the most auspicious time for praying; hence he asked his devotees to pray at the early hours of the day. Since then, the rituals have been followed. After Amrit Vela, devotees spend their day with Katha and Kirtan rituals at Gurudwara.

On this day, Gurudwaras are decorated and hymns are sung, even fireworks are used to celebrate this auspicious and special day.

Guru Ka Langar – The Most Important Part Of The Festival

The Langar is a very vital part of the Guru Nanak Jayanti. Lunch is prepared for the large community, and it is called Guru Ka Langar or Guru Nanak Jayanti Kangar. It is the most nutritious, tasty, and vegetarian meal. Furthermore, all the food items are prepared under very hygienic conditions by the devotees of the Sikh community. One of the most famous dishes during this festival is Kada-Prasad – a sweet.

Guru Ka Langar denotes that all people, irrespective of caste, creed, status, can come and eat good food under one roof. Thousands of devotees come together to prepare wholesome, clean food and serve many people who visit Gurudwara.

Offerings and Dishes on Guruparb Or Guru Nanak Jayanti

The principles or rituals inaugurated by Guru Nanak Dev were not only popular among the followers of the Sikh community but also followed by many others in the current century too. By following the life lessons given by Guru Nanak Dev, you will not only make your life successful but can also achieve your desires and goals. You will attract more positivity and happiness in life.