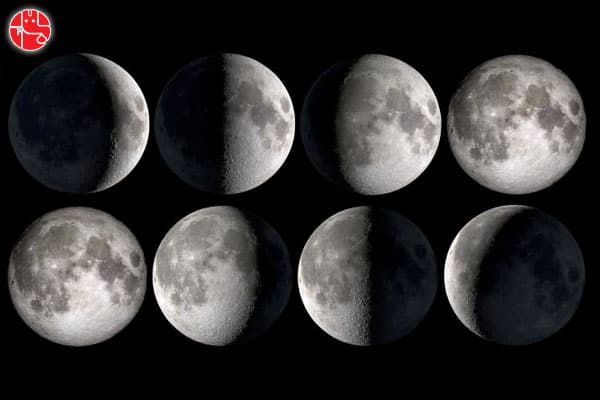 (Image Source: Internet)
The moon takes 28 to 29 days to circle the Earth once, and once in this duration comes a phase when it is directly between the Sun and the Moon, and on this day the Moon appears to be fully illuminated. This is called the Full Moon day. This Full Moon has certain influences on humans and even animals. While wolves and dogs tend to behave oddly, some humans tend to be afflicted by sleeplessness or mental instability, but other humans feel their moods uplifted on Full Moon night. Since time immemorial the Sun and the Moon have helped man keep track of time, and even seasons. Based on the season, man named the Full Moon occurring in different months by different names. The following is a list of the nick-names that native Americans had given to the Full Moon of different months:

This is also known as the Cold Moon and the Hunger Moon, as packs of wolfs would howl because of hunger outside homes and villages, as food was scarce during severe winters. Symbolically you could take this to mean that you need to assess the challenges you are facing and how best to deal with them. Read about planet Moon.

Also called the Snow Moon or the Quickening Moon. Here also there is a scarcity of food because of the snow. The second name refers to the speeding up of the winter season and its transition to spring. From this we can learn to adapt to changing circumstances smoothly.

This is also sometimes called the Crust Moon or the Sap Moon. This is the last full moon of winter, and as the snow melts, it becomes crusty. Worms leave their trail on the ground, and the sap of the maple trees would start flowing and people would start collecting it. This is a bit of an up-and-down month according to the season, and teaches us to be flexible. Do you want our Experts to prepare a detailed Eclipse Report based on your Birth Chart and analyse the long-term impact of the Eclipse on your life? Then, avail the report - Lunar Eclipse Impact On You now.

This Full Moon is also known as the Sprouting Grass Moon or the Egg Moon, so named after the spring flowers which appear like pink moss. The spring breeze helps to scatter the fallen flower seeds, adding to the spawning of more flowers and plants. This moon symbolizes fertility and how to indulge in reproductive activities responsibly.

This Full Moon is known as the Corn Planting Moon and the Milk Moon. The Flower Moon is so called because of the abounding flowers during this season. This calls to mind the concept of the divine feminine nature and is a reflection of the picturesque outdoor scenes with spring in full bloom and summer coming on. It teaches us to appreciate the bountiful nature.

The June Full Moon is variously called the Rose Moon, Strong Sun Moon, and the Strawberry Moon. It derives its name from the short period available for the harvesting of strawberries. This phase is also very significant for spiritual quest.

The July Full Moon is also called the Thunder Moon and the Hay Moon, because during this time the antlers of Buck Deer stick out of their fore-heads, which are full of fur. Thunderstorms are also frequent in July. Its other names include Blessing Moon, Mead Moon. At this time of the year, summer, you may be feeling lazy and low because the holiday season is very far. However, it reminds us that this is a good time to take stock of how you are progressing.

This Full Moon is also known as the Green Corn Moon and the Red Moon. The fishing tribes of North America found out that a large species of fish called the Sturgeon was very common during this month, and the moon appeared reddish. Though they may seem disconnected, they actually remind us of the variety available in nature, from fish to corn, and that it is time to start stocking up for the winter when resources may be meagre. You can also Talk To Our Astrologer and seek expert guidance about the effects of the Eclipse on your Life.

Its other names are Barley Moon and Harvest Moon. As the name suggests it is harvesting time after the Autumn equinox. The moon is rather bright during this month and rises early, giving farmers more visibility for harvesting till late in the evening. Its symbolic meaning could be that we will now reap the rewards of our hard work done in the past.

The October Full Moon is variously called the Travel Moon, Blood Moon, Sanguine Moon or the Dying Grass Moon. This month also the moon is very bright and big, helping hunters to hunt the deer and fox well-fed during the summer. The meat is also stored for the upcoming winter months. Again this Full Moon symbolizes the need to store up your resources for lean times.

The Full Moon this month is also called the Mourning Moon, Beaver Moon, and the Full Frost Moon. Around this time, beaver traps were laid well before the swamps froze, which ensured a good supply of warm furs for winter. The Mourning Moon reminds us that we need to mourn the losses we have suffered. These names also reflect a deep transitional period and how it can be a spiritually healing time.
You can also grow financially. Get the Free 2018 Finance Report.

The December Full Moon is also called the Long Night Moon and the Oak Moon because this month the nights become long, dark and cold. The days are short, the nights are long, and celebrations are the order of the month, probably signifying, for many, the end of a very successful year; and for some, the end of a negative phase with the opportunity of changing that in the new year, which is just around the corner.
With Ganesha's Grace,
The GaneshaSpeaks.com Team
Share