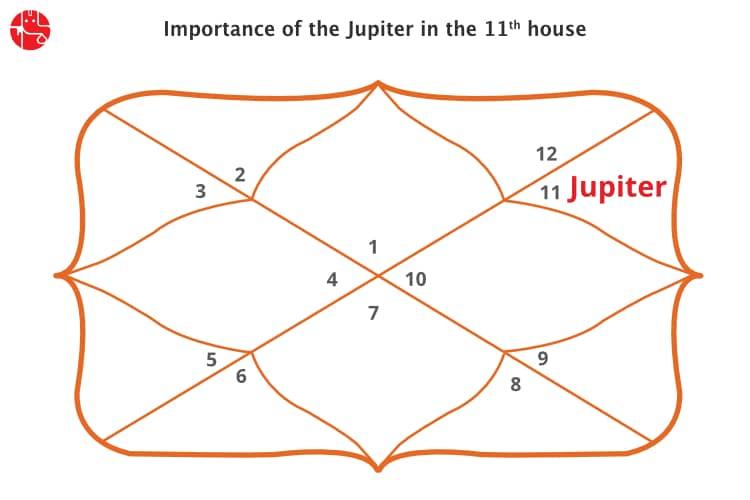 Jupiter is known as the King of Planets and Gods. It symbolizes expansion, morality, honor and hope. It signifies luck, fortune, prosperity, senior officials such as judges. It also widens the psychological horizon of its natives on the basis of their traveling, education, and study. It also grants them the ability to heal their inner selves. It inclines them towards philosophy and religion. It makes them rich and prosperous. The 11th house stands for hopes, wishes, and dreams. It also displays the money that may be earned through a lottery. It embodies step-children as well as adopted children. It governs the shin. In terms of profession, it represents the immediate outcome of its natives’ career. It also represents the financial condition of their employee. Natives with Jupiter in 11th house may be inclined towards religion and philosophy. They may be creative and expressive in their speech. They may be cheerful even in adverse conditions and have lots of friends to support them in times of need.

The areas affected due to Jupiter in the 11th house

Although both the 11th house and Jupiter hold positive aspects in the horoscope, Jupiter in eleventh house is considered as one of the most beneficial placements. It makes its natives expressive and gives them a good sense of humor.

As per Jupiter in 11th house Vedic Astrology, the natives may have a philosophical bend of mind and are likely to be always curious. They may become a good leader and make the dull environment cheerful with their presence.

They may be lucky to have lots of genuine friends who might support them even if they hit rock bottom. They are likely to have friends in foreign as well. Know the planetary positions in your chart and what they have to predict about your foreign affairs. Will you be able to travel to a foreign land? Will you be able to set business or resources abroad? Will you be able to make connections there? Get your free personalized Janampatri and get the answers to the above questions now!

They may perform well in jobs and enjoy success in group projects. They may earn themselves a huge fortune as well. There are chances that they may be able to enjoy luxuries of life such as large property and vehicles. The Jupiter in 11th house natives may have a good marriage. The females of Jupiter in eleventh house may get good husband and males may get a good wife.

Jupiter in eleventh house may cause its natives to indulge in overeating and overdrinking. They are likely to become addicted to eating or drinking.

Due to the effect of Jupiter in 11th house, the natives may be highly socially active beings with lots of friends. This may often make them spend a lot and get exhausted due to group activities and outings.

Know what the future has in store for you! Get your free personalized 2020 report and know where do you lie in the coming months in all the areas of life!

Jupiter is also called Upachaya, the house of accrual. It brings good luck with wisdom. It represents law, marriage, guardians, and friends. It indicates sportsmanship, science, knowledge, and authority. When benefic in the chart, Jupiter blesses its natives with flourishing wealth. However, when malefic in the horoscope, it makes them overconfident and irresponsible. The eleventh house is also known as the house of friends as it signifies friends, groups, and all types of organizations or clubs. It shows how its natives would interact and blend in social situations. It rules their humanitarian aspect, charities, and volunteering for a social cause. It also denotes the social area in which they may be interested in volunteering. Jupiter in eleventh house may bring immense luck to its natives’ lives. They may accumulate lots of wealth and have a big circle of friends as well.