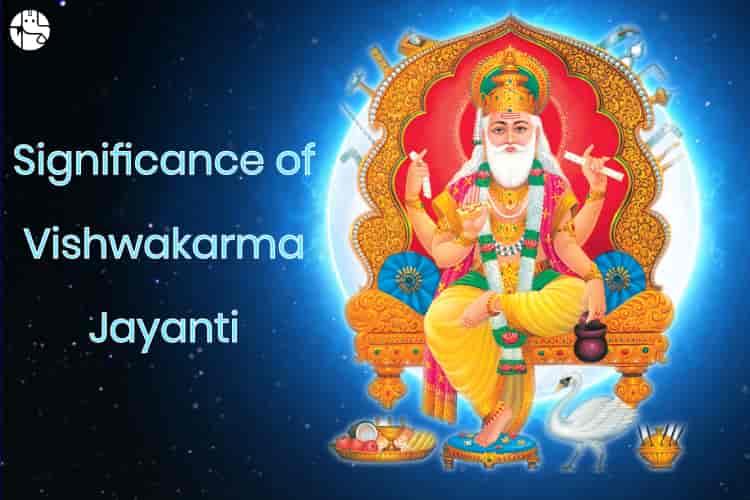 For the adherents of Hinduism, Vishwakarma Jayanti holds tremendous religious importance. This day is celebrated in honour of the holy carpenter and the architect of the world, God Vishwakarma. He’s Lord Brahma’s son, too. His greatness is stated in the science of architecture and mechanics, the Rig Veda and the Sthapatya Veda. For the worker’s group, Vishwakarma Puja is a very important day.

On this day, they pray to Lord Vishwakarma for progress and smooth and safe functioning of their machinery in their respective fields. The craftsmen work their tools on this day for Vishwakarma Puja and refrain from using them. This is thus for them a vacation and lunch is organised in several places free of charge for them.

The day of Kanya Sankranti or Kanya Sankramanam, as specified in the Gregorian calendar on September 17.

For more auspicious dates and timings, refer to our Vedic Panchang.

There are various tales about legends and details related to Lord Vishwakarma’s creation and birth. According to a legend, Dharma was Lord Brahma’s son, Vastu’s wife’s name. Vastu, the reigning crafts god, and Vastu was Vastu’s seventh son. The same Vasudev who gave birth to Lord Vishwakarma, whose wife’s name was Angiresi.

Prabhas, the eighth son of the wise Dharma, was now married to Goddess Vadini, Jupiter’s sibling, according to Skanda Purana. Divine Vadini was Vishwakarma’s mother. In addition, Varaha Purana states that the thinking person Vishwakarma was founded on Earth for the well-being of people by Lord Brahma. People believe that Lord Vishwakarma was born on Vishwakarma day as the seventh child of Lord Brahma, the universe’s founder.

Lord Vishwakarma is the divine architect of the universe. According to Hindu myths, scriptures and ancient books of astrology. He designed the whole world’s development.

It is said that he built Dwaraka Holy City that Lord Krishna had ruled. Lord Vishwakarma has also created powerful and special weapons for God and created the Mahasabha of Pandavas.

Religious texts show that Lord Vishwakarma is the one who brought into being the tripartite universe – celestial kingdoms and their planets, the mortal realm and its worlds, and the celestial realms and other worlds. He built Swarga in the Satya Yuga (Heaven), Sone ki Lanka, in the Treta Yuga, the town of Dwarka, the capital of the Dwapara Yuga, of Lord Krishna, and many other marvels of architecture.

He shaped carts and different arms of Gods and gave them all unique divine characteristics. And he revealed to us the industry sciences, which shows us the progress achieved. The Rig Veda, whose name means “All Completion” in Sanskrit and which is believed to be “the Princely Universal Architect” by Hindus, gave shape to the celestial architecture of all things that are in this universe with one’s hands. As a reverence to all the engineers, architects, craftsmen, manufacturers, weavers, engineers, smiths, sweaters, industrial workers, and factory workers, he is worshipped.

On the last days of the month of Bengali Bhadra in Eastern India, such as Orissa, West Bengal, Jharkhand and Tripura, Vishwakarma Puja is celebrated as “Biswakarma Puja.” It is also known as “Kanya Sankranti” or “Sankranti Bhadra.” Vishwakarma Puja is the biggest and most favourable day for craftsmen worldwide.

Vishwakarma Puja is also observed after Diwali in certain parts of the country, particularly in Bihar and a few northern states. It is celebrated according to the Hindu calendar in the month of ‘Magh.’ Vishwakarma Puja is performed on the Rishi Panchami day in the southern state of Kerala.

Wondering how to connect with your God in these trying times? You can now perform an Online Puja, without stepping out of your house!

On the day of Vishwakarma Puja, employees do not work. They merely worship their equipment. They give Lord Vishwakarma prayer to protect and safeguard them and grant them success. In Assam, Uttar Pradesh, Karnataka, West Bengal, Bihar, Odisha and Tripura, Vishwakarma Puja is celebrated with great fervour.