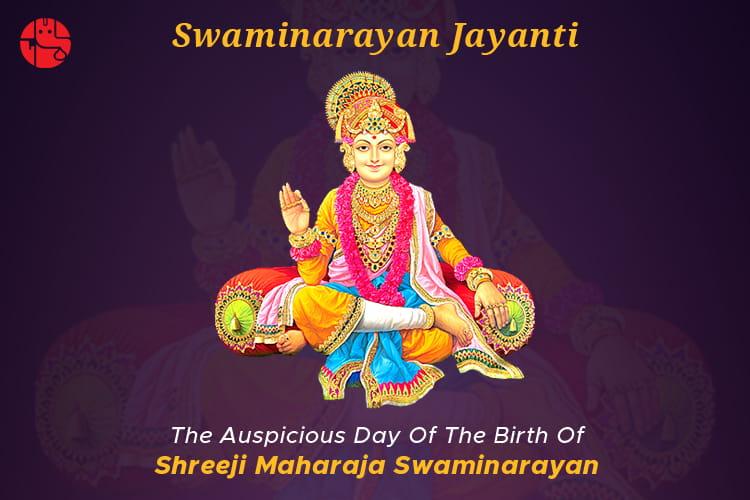 Swaminarayan Jayanti is the celebration of the birth of Lord Swaminarayan. It mostly coincides with the festival of Rama Navami. On this day, the followers of Lord Swaminarayan worship him by reciting various episodes of his life, chanting prayers dedicated to him and having discussions on topics related to spiritualism.

The Birth Of The Lord Swaminarayan

Born at 10:10 PM on April 2, 1781 (Chaitra Sud 9, VS 1837), the supreme Lord Ghanshyam manifested on planet Earth to bestow people with Kalyan (liberation) and destroy Adharma (sin and chaos). Ghanshyam was the name given to Lord Swaminarayan by his mother Bhakti-Mata. His father’s name was Dharma-Dev. Lord Swaminarayan was born at Chhapaiya, Kaushal - Desh near Ayodhya and was crowned with many other names like Hari-Krishna and Nilkanth by Markandey Rishi. Besides, he was also called Sahajanad Swami and Narayan Muni by Ramanand Swami along with being addressed as Shreeji Maharaja by his bhaktas (devotees).

Although, later he went on to be called Swaminarayan.

This year, Swaminarayan Jayanti will fall on Thursday, April 2. However, due to the pandemic of Coronavirus, it is uncertain that the celebration of this auspicious festival will be done on a large scale. What will be your health status in the upcoming period in 2020! Know if you will fall ill or lead a healthy and prosperous life with our free and personalized 2020 report!

The Journey Of The Lord’s Life From Ganyshayam To Swaminarayan

At the mere age of 7, Ganshayam mastered all the Vedas, Ramayana, Bhagwatam and many other ancient Hindu scriptures. Interestingly, he had won a theological debate at the age of 10. When he was 11, he detached himself from all the worldly desires and embarked on his 7-year journey of nearly 7000 miles across India. He mastered Ashtanga Yoga just at the age of 14, and when he grew up to be 20, he became a spiritual head. When he grew old and reached the age of 49, he left for Akshardham. Thereby, he has been worshipped as a God among his followers as he promised to stay on the Earth forever.

Know what will be your future and if you will be able to stand out from the crowd. Explore your potential to make a difference in someone’s life with our free and personalized Janam Kundli report now!

Some Of The Notable Works Done By Swaminarayan

He re-established Ekantik Dharma which consists of Svadharma (self-righteousness), Bhakti (devotion to God), Gnan (knowledge and wisdom), and Vairagya (detachment). He also removed wrong religious practices and corrected the misinterpretations of Hinduism. He turned nearly 2000 people into sadhus (monks), of which almost 500 of them received the title of Paramhansa (the highest title a monk can achieve). He built many temples with idols installed in them. This was his way to remain on the Earth forever and make his teachings immortal. He wrote a lot of Shastras (books of holy preachings), authenticated the ancient ones, and recited them as well. He also instructed his followers to do the same. In 1801, at the age of 20, he founded Swaminarayan Sampradaya and started doing activities for the social welfare of women, children, and the poor and needy people. He also stood against violence, superstitions and worked on eradicating them as well. Hence, he bestowed Shikhsapatri, a moral code for discipline.

As per the tradition, a continuous Dhun (a prayer made of the Lord’s name recited rhythmically) is kept for the complete day, i.e. 24 hours to mark the arrival of the Lord. As the Lord enters the earth, his idol is placed on a cradle and is offered a thaal of bhog (sacred offerings in the form of food). Later, an aarti is performed and the magnificence of the Lord is hailed all over the temple. Moreover, prayers are sung along with gently swinging the cradle. The Lord is seated on the crib for 6 days, and every day, the saints and followers perform prayers for him.

At the end of all the rituals, prasad (holy offerings priorly made to the Lord) is distributed among the devotees. Prasad, on this day, consists of Panchajiri, which is a dish made by mixing coriander seeds, fennel seeds, dill seeds, coconut, and jaggery in ghee (clarified butter). In some temples, Annakut (a dish made from 65 different vegetables and fruits) is also offered as a prasad. On this day, many devotees practice a strict fast devoid of water while many others consume water and only eat fruits or farari food.