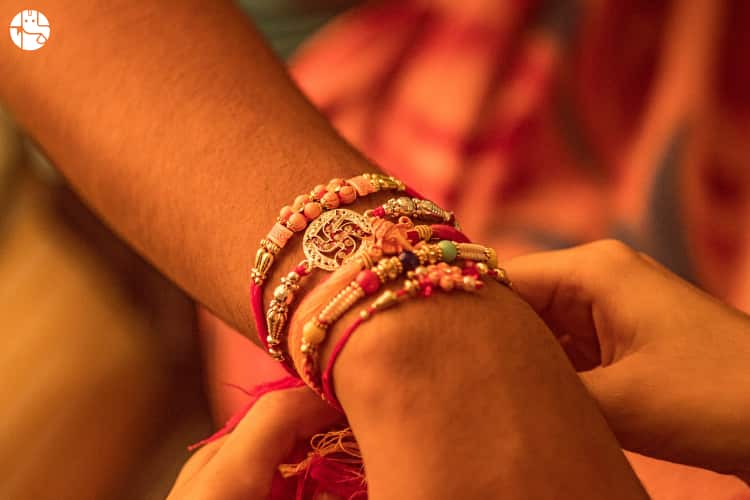 The Hindu festival Raksha Bandhan this year will be celebrated on Wednesday, August 30, 2023. Raksha Bandhan, the festival which celebrates the eternal love between brother and sister falls on the full moon day of the lunar month Shravan also called Shravan Purnima.

The best time to tie Rakhi on Raksha Bandhan is during Aparahna which is late afternoon according to Hindu division of the day. If Aparahna time is not available then Pradosh time is also suitable to perform rituals related to Raksha Bandhan. Raksha Bandhan rituals should not be done during Bhadra. Bhadra is a malicious time which should be avoided for all auspicious work.

The Importance of Raksha Bandhan

Usually, it is men who are considered more powerful, strong, sturdy and muscular then women. However, during Raksha Bandhan, it is women who take the initiative to protect their brothers from all the evils and adversaries in life. The bond of protection Raksha Bandhan is a Hindu festival, which invigorates the brother-sister emotions. On this day, the sisters tie a sacred thread or raksha sutra on the wrists of their beloved brothers in order to protect them from all dangers. In fact, it is the day when brother and sister express their deep love and affection for each other. Similarly, the priests too do the same to their religious clients (yajman) and the subjects tie the ‘raksha sutra’ on the wrists of the kings all with a view to protecting them from all the evils.

The Historical Story Behind Raksha Bandhan

It is believed that the custom started after an incident mentioned in the Mahabharata. Once Shri Krishna sustained an injury on his wrist by a sharp weapon. At that time, Draupadi tore the loose end of her sari and tied that around Shri Krishna’s wrist without even giving a second thought. Shri Krishna accepted it as ‘raksha sutra’ and when Draupadi was in process of being stripped off her clothes by Duhsashan in the darbar of Duryodhan, Sri Krishna protected her from extreme disgrace by supplying her an endless sari.

During the Mughal period, Rani Karnavati, the mother of Maharana Vikramaditya of Mewar, sent a Rakhi to emperor Humayun in order to get his help and protection from the impending attack on Mewar by the rulers of Malwa and Gujarat. Humayun responded readily and defeated the rulers of Malwa and Gujarat, protecting the safety and security of Mewar. There is another instance of the significance of Rakhi during the reign of Jahangir. In Rajasthan, there was a continual hostility between two principalities. Taking advantage of this disunity between them, the Mughal army started a military expedition against one of them and the other king was also preparing to help the Mughals by mobilizing his army. At this, the first king sent Rakhi to the other king who was going to help the Mughals. It was then that this king attacked the Mughal army instead and the two united armies defeated the Mughals and remained united forever.

The Mythology Behind Raksha Bandhan

Puranas too depict few instances of Raksha Bandhan. Once there was a war between the Gods and the demons, which continued for 12 years in which the demons captured the kingdom of heaven. The defeated Gods roamed hither and thither like beggars and passed a precarious life. Indra, the king of Gods went to Brihaspati, the preceptor of God. He narrated how he and other Gods were neither safe nor was there any way of coming out of here.

Under these circumstances, there was no other alternative than wage war against the demons who had repeatedly defeated him. Please advise some way-out. This conservation was being heard by Goddess Indrani. She said:Please do not get scared. I will do whatever is necessary to get rid of this danger. This day was the Shravan Purnima. Early in the dawn, Saehi Devi took one sacred thread and after the Brahmins uttered the holy invocation, she took it and tied around the right wrist of Indra and told him to engage in war against the demons.

As the sacred thread was purified by the holy mantra, it became powerful and protected the Gods against all evils and this vanquished the demons. The holy mantra reads thus:

Raksha Bandhan Mantra And Its Importance

This is the Vedic form of the Raksha Bandhan mantra. Since time immemorial, this mantra is being chanted by the Brahmins when they tie Rakhis around the wrists of the people. The same mantra is chanted by the brothers and sisters to protect the life and take responsibility of each other. On this day, the Brahmins are offered money and new clothes, and brothers present their sisters who tie them a Rakhi with money. This is the day of pure and innocent love between siblings.

The Riuals And Practices During Raksha Bandhan

It is believed that the Shivlinga or the phallus form of Lord Shiva at the Amarnath cave of ice accomplishes its full form by nature’s process. A pair of white pigeons are seen from time immemorial. Legend has it that when Lord Shiva was narrating the story of immortality to Devi Parvati, she could not listen to the complete story as she fell asleep while the pair of white pigeons heard the full story. It is said that since that time pigeons have become immortal and appear before the holy devotees of Lord Amarnath on the day of Shravan Purnima i.e. Raksha Bandhan day. On this occasion, saints and other holy men offer holy sticks to Lord Amarnath after they wore worshipped with religious rites and rituals at Sri Nagar and carried to the cave of Amarnath.

In southern parts of India including Andhra Pradesh, Tamil Nadu, Kerala, and Orissa this day is celebrated as Avani Avittam. In Karnataka, the followers of Yajurveda celebrate this day as– Upakarma. Upakarma is the traditional day to begin Vedic studies. On this day, the followers also change their sacred thread or yajno pavitam, the Sanskrit word for the thread. It is also called “janivaara” in Kannada, “janeyu” in Hindi, “poonool” in Tamil, ” poithe” in Bengali, and “jhanjyam” in Telugu
While changing the sacred thread the following mantra is chanted.

In many parts of Gujarat, this day is celebrated as Pavitropana. On this day People perform pujas and pray Lord Shiva for the forgiveness of all their misdeeds and sins.