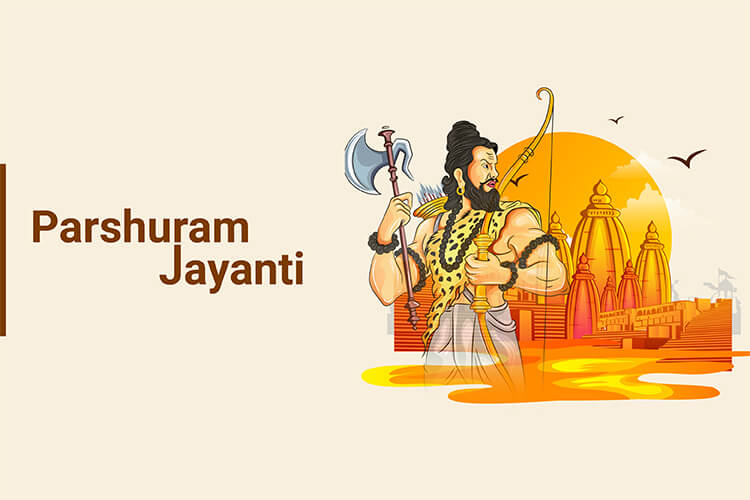 Parshuram Jayanti symbolises the onset of Tretayug and carrying out righteous acts on this day is considered highly rewarding. Hence, this day holds divine significance and is celebrated with immense excitement and fervour. The meaning of the word ‘Parshuram’ is ‘Ram with an axe’. Hence, Lord Parshuram is seen holding an axe, a weapon  that marks strength, honesty, and destruction of ego. As per the folklore, the Lord descended on this land to save the people from the cruelty of the Kshatriyas. Parshuram was extremely knowledgeable, an exceptional warrior and lived to help mankind. What are your hidden potentials and characteristic traits as per your birth chart? Access your Janampatri and know in-depth about yourself.

Renuka and Jamadagni (one of the seven rishis or Saptarishis) gave birth to Lord Parshuram. He is known to be the role model of love and devotion for one’s parents. Hindu scripts show that once his father had a severe conflict with his mother and asked Parshuram to kill her. Without thinking twice, he killed her immediately. His father was moved seeing the obedience of his son and gave him a boon. The son quickly said ”Mother”, asking for his mother’s life. Thus, he was granted his wish without using a weapon.

As per the epic Mahabharata Vana Parva (the sacred text of Mahabharata), there lived a King named Kartavirya Arjuna in the ancient kingdom of the Haihayas of Madhya Pradesh. He had become highly consumed in his powers. His arrogant attitude caused him to conduct offensive acts against people, Devas, and Yakshas. At the same time he arrived at the shelter of Renuka and Jamadagni who greeted him with warmth. But a conceited Kartavirya carried overpowering pride, and demanded an insulting return for the couple’s kindness. He killed Jamadagni as he refused his demand. He also murdered the holy cow Kamadhenu. Parshuram avenged his father’s death by killing Kartavirya and vowed to demolish the Kshatriya rulers. The kings, in fear of death, escaped to faraway places. Kashyap Muni witnessed this sight, and calmed Parshuram asking him to abandon the Earth and live on the mountain. Since then, he is said to be living on the Mahendra Parvat.

Lord Parshuram is also shown in the ancient texts as present during the marriage ceremony of Goddess Sita and Lord Rama in the Treta Yuga. Are you concerned about your  marriage prospects this year? Get your Marriage Report written by experts and get answers for your questions.

As per the traditions, Parshuram is known to be immortal and resides in the mountains unlike the other incarnations of Lord Vishnu. Hence, he is not offered prayers the way we worship Rama or Krishna. Temples of Lord Parshuram exist on the western seaside of India, and one of the significant temples is at Pajaka in Karnataka.

Chant the below verses to gain special blessings on this day: