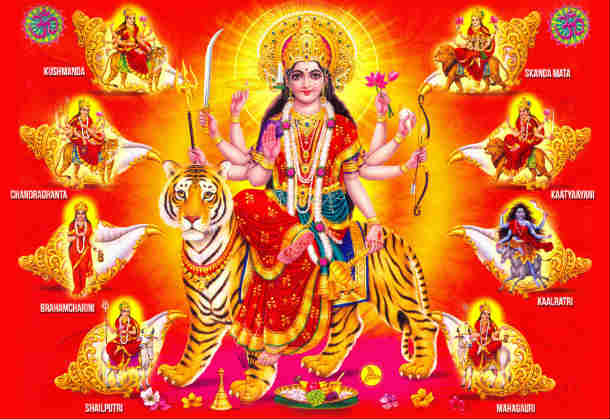 The festival of Maha Navratri is considered a very powerful and auspicious festival in the Hindu tradition and is celebrated with much fanfare. There are many legends and stories related to this festival, which deal with the hugely powerful Goddess Durga, but there are some aspects which are less known. Herein, we present to you, the nine lesser known aspects of Maha Navratri.

1) The Navratri which falls in the month of October is the most popular, however,  you may not be aware that there are a total of four Navratris celebrated in the year, out of which two are the main ones, while the other two are called the Gupt Navratris.

1) Chaitra Navratri – March/April
2) Ashad Navratri – June/July (Gupt Navratri)
3) Ashwin/Sharad Navratri – The Maha or Main Navratri – September/October
4) Pausha Navratri – December/January (Gupt Navratri)
2) The nine forms of Mother Shakti – who is the ultimate female form of power, are worshiped across various regions in India. The names of the nine forms are: Durga, Bhadrakali, Jagadamba, Annapurna, Sarvamangala, Bhairavi, Chandika, Lalita, Bhavani, and Mookambika.
3) This nine-day period has three significant purposes, and for this, three different powerful Goddesses are worshipped. Goddess Durga is worshipped for destroying the negativity and evil, Goddess Lakshmi for wealth and prosperity, and finally, Goddess Saraswati for knowledge and wisdom.
4) Hindu legend claims that the Navratri is celebrated especially to mark the famous nine-day long fight between Lord Rama and Ravana.
Also Read: 9 Goddesses You Should Worship This Maha Navaratri To Gain Health, Wealth And Liberation

5) Besides, as per the tradition, Goddess Durga had agreed to marry Mahishasura had he won over her in the battle. This battle went on for nine days and eventually on the tenth night the Goddess beheaded the devil. This night is also celebrated as Dusshera or Vijaya Dashami.

6) The well-known dance of Gujarat, Garba is performed with a clay lantern in the centre representing the mother Shakti or power. People dance around the lantern, which symbolizes how each human creates energy within him or her. The more you dance, the more energy you create .

7) Many Hindus fast during the nine days of Navratri. All the Hindus except Bengalis (in some cases) stay strictly vegetarian throughout the festival.

Do Not Miss: Special Mantras To Generate Positive Vibrations – Here's Presenting The Mantras Of The 9 Goddesses

8) One of the most powerful works describing the incredible greatness and extraordinary powers of Goddess Durga is 'Durga Saptashati'. Various followers of the all-powerful Mother recite this, more so during Navratri, to seek her blessings.

9) The regional dance form of Gujarat – Garba is world famous and people (largely Indians) in other parts of the world, like the US, UK, Canada, Australia and New Zealand also organise the Garba events.

With Ganesha's Grace,
The GaneshaSpeaks.com Team
This Navratri, attract unlimited prosperity, happiness and wisdom with the exclusive Lakshmi Ganesha Yantra!
View All Festivals